Large scale image plans are created in photographic quality to record the paint and decoration of rooms. The result combines the photographic record of the present condition with exact geometry. The compilation of image overviews room by room facilitates the work of the people involved in the project.

For the coherent representation of walls, ceilings and floors, the images are rectified projectively based on coordinates and mounted to an image plan using control points measured by total station.
Depending on the object geometry, image plans are produced using 2D-image rectification or the true-to-scale development of surfaces.
Based on a digital surface model (3D laser scanning) structured or multi-curved surfaces (domes, cross vaults) are ortho-projected onto planes or surfaces of cylinders and cones. 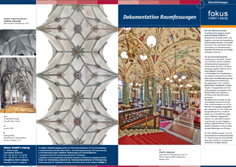 To document the conservation images in the scales 1:10 and higher photographic quality are created. The result combines the photographic record of the condition with precise geometry. For the coherent representation of large wall surfaces, the images are rectified projectivly on a coordinate reference and mounted to an image plan using control points measured by total station.
Depending on the object geometry, image plans are produced using 2D-image rectification for plane walls or by projection of apses, vaults and arches onto a developable cylinder or cone surface.
Heavily deformed walls or multiple curved surfaces (cross vaults) an orthogonal projection based on a digital surface model (3D-Laserscan) is calculated onto a plane or cylinder. 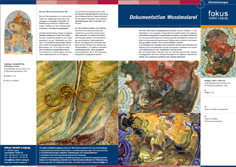 Digitally rectified images are a cost-effective alternative to CAD-plans. The result of the rectification is a true-to-scale photomap, which combines the photographic record of the present condition with accurate geometry information of the object.
To support conservators, to assemble inventories of museums and collections, to document, digital photoplans at scales of 1:25, 1:10 or larger are provided at high photographic quality and merged to a true-to-scale record. 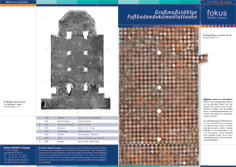 The curved surfaces (e.g. of towers, apses and vaults) can be developed true-to-scale to the plane. Objects with more than one curvature or a strong deformation (e.g. cupola, apses) are projected on a medium cylinder. In both cases the geodetic measurement of control points, profile lines and further object information are carried out parallel to the photogrammetric image capture. The unrolled detail images are mounted to a true-to-scale photoplan, which can be used for documentation purposes or as mapping basis. The surfaces are digitally developed with the software metigo® 3D. 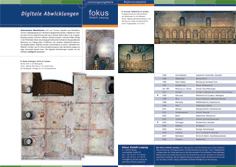 Conserving historic buildings, the true-to-scale reconstruction of lost details or destroyed building parts based on historic images might be of interest. If there are only a few images available 2D-planes can be reconstructed and evaluated metrically. However, if more images captured from several positions are available these can be photogrammetrically evaluated in 3 dimensions. The workflow described at the prospectus does not depend on the kind and size of the objects (cornice profile, chandeliers, floors, walls, building parts). 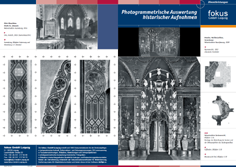 Preparing the conservation of artwork, supporting its investigation and recording finally the conservation measures photographic images captured within various spectral ranges are required. In addition to digital image planes up to 1:1 scale superimposed image plans are created from grazing light and macro shots, UV-reflectography, UV-fluorescence, IR-reflectography and X-rays as well as historic images (also delivered by our clients).

For the work on site a digital medium format camera (Phase One) as well as specially modified cameras or digital camera backs for IR and UV images in conjunction with various filters are used.
If required radiographs can be captured using a mobile X-ray unit on the customer's site in cooperation with photographer Asmus Steuerlein. For lightning we use special daylight spots (cold light) for digital photography as well as a professional flash-gun camera and UV-radiators.

The images are processed within a comprehensive colour management process starting with grey and colour reference during image capture, the RAW-develoment at colour-calibrated workstations to the printout with non-ageing ink on baryta paper for long-term archiving.

Before starting work, the radiometric distortion and chromatic aberration of the images are corrected. Matching algorithms with sub-pixel accuracy guarantee exact rectification and montage of the detailed shots to an overall image with high photographic resolution and without any interferences. 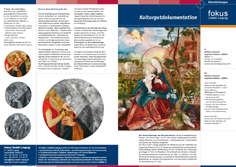 Large sized stereo images form the basis for the production of true-to-scale drawings of facades, walls and ceilings as well as of single objects. Parallel to stereo image capture, the geometry and condition of very complex objects are surveyed with a totalstation in reflectorless mode. The images are graphically evaluated at the PC using the software metigoÂ® MAP. Regarding to accuracy and completeness the stereo-photogrammetric evaluation corresponds to a deformation-true metric survey. This procedure is particulary suitable for the representation of heavily decorated and structured objects. Curved surfaces can be developed to equivalent and equidistant projections. Further sections, e.g. to complete metrically surveyed plans, can be derived.

Subject to listing and grading of the object and the consent given by the local monuments authority an approbriate documentation to the object is offered. In accordance to the conservation measures this can comprise a simple photographic record, the stereo documentation with a photogrammetric camera for evaluation at a later date as well as the deformation-true totalstaion survey at various accuracy levels, digital image plans at various scales, graphic facade plots and a stereo-photogrammetric evaluation.

To plan and illustrate refurbishment and reconstruction projects for the conservation of historic monuments, visualisation is an important aid for decision making. Depending on the respective tasks different procedures might be used.

In the simplest case different drafts can be visualised by montages, overlays and colour variants in the rectified photomap.

For the reconstruction of lost building parts or entire buildings a visualisation in the present environment is advantageous. For this purpose historical pictures can be used, by which the camera position will be photogrammetrically calculated. The historical building view is inserted into a photograph of the current situation taken from the calculated view point.

For complex tasks of visualisation it is advisable to produce a 3D photo model. Using existing plans, local geodetic measurements and the photogrammetric evaluations a true-to-scale 3D-CAD model is constructed. The level of detail used for the model depends on the task. Image information for the photorealistic model derives from existing image plans. Where necessary historic photographs are added. The true-to-scale 3D photo model is further used miscellaneously: as-built documentation, development of information systems, photo-realistic views, animated tours and films for presentations. Additionally, views of the 3D photo model with selected lines of sight can be computed and inserted into photographs of the current situation. The 3D photo model can show both the historic condition and the current status of planning. 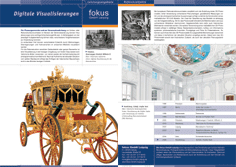 Digital rectified images represent a cost-effective alternative to CAD-plans. The result of the rectification is a true-to-scale photomap with exact geometry for CAD evaluation as well as true-to-scale mapping.
For the comprehensive documentation of facades with several planes the individual planes are separately rectified on the base of reference points that were measured by tacheometer and combined afterwards digitally to a true-to-scale photomap. If the surfaces are very irregular or curved an orthogonal projection is calculated with a digital surface model (3D laser scanning) onto a plane or a cylinder.
We use a full-frame SLR-camera (7300 x 4900 px) and focal lengths from 12 to 800 mm. for special applications. Correction parameters are calculated for distortion and chromatic aberration for all lenses. 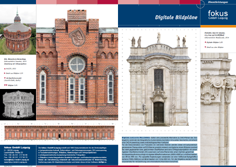